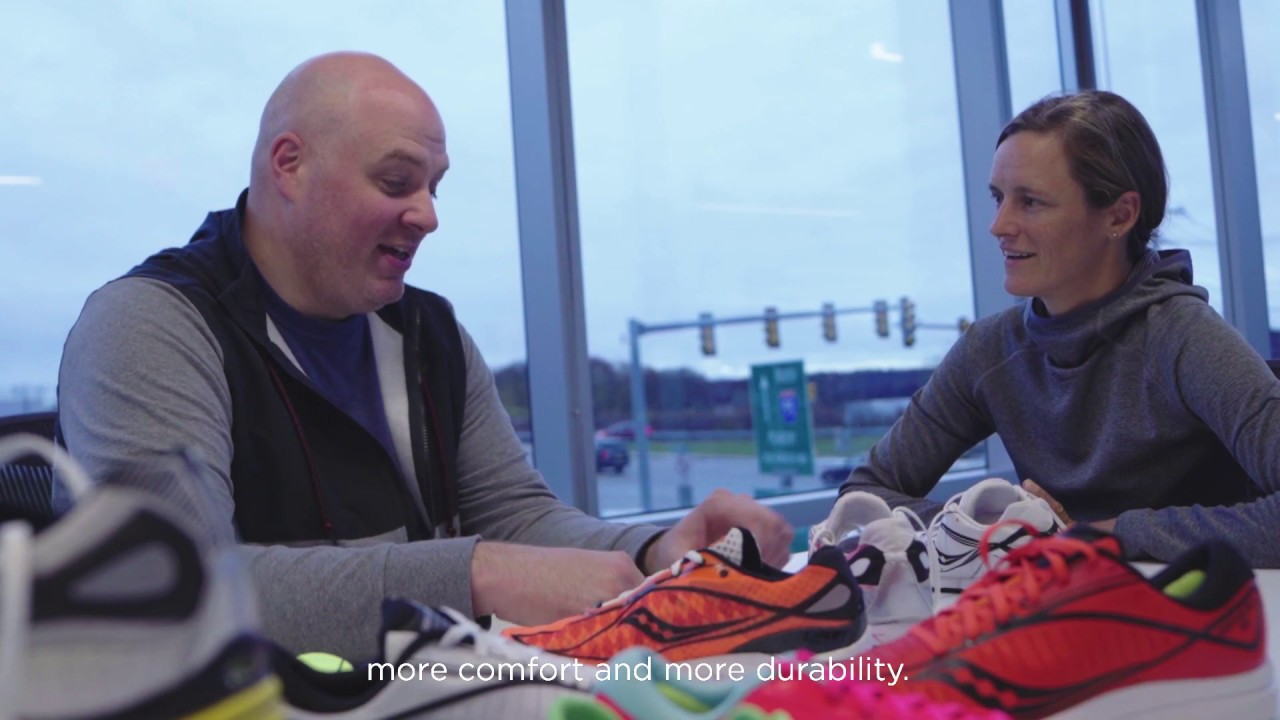 Back In Stock Notification

The tenth anniversary of this iconic running shoe has been whittled down to exactly what a runner needs. The flexible EVA+ outsole and midsole material is lightweight and durable enough to withstand tough miles. FORMFIT and EVERUN provide plenty of responsive cushioning for daily training miles or racing longer distances. This shoe will disappear on your foot with a breathable one-piece engineered mesh upper so you won't have to worry about your shoe.

Thank you for submitting a review!

Your input is very much appreciated. Share it with your friends so they can enjoy it too!

As an avid Kinvara fan prior to version 7, I must confess I was skeptical stepping into the new version. When I first put it on I was immediately psyched that Saucony had relaxed the fit around the toe box. The new targeted heal pads really shored up the fit around the ankle locking my foot in place. Within the first quarter of a mile I had settled in to my run and barely noticed my feet throughout the rest of the first go. Since then this has become my staple light weight trainer anytime I want to kick up the pace. The only reason why I am not giving this update a five-star rating is that it is still a bit softer than I like. I personally would like to see the removal of the everun top sole from this shoe, but that is a personal preference. The turn over is still great and I am psyched to be able to run in the Kinvara again. Plus, Saucony has the sickest orange color on the market. I highly recommend this version of the Kinvara to anyone looking for a light, fast, responsive shoe to carry them as far as they would like to go.

I've done 4 run in the new Saucony Kinvara 10, and I must say I am surprised. The last Kinvara I ran in was the Kinvara 2 back in college, and no pair has really felt as good since. This one definitely passes the test. It is incredibly light, but also a lot more supportive than I thought it would be. I tried it initially with a Black Superfeet, and found the combination too stiff, so I switched to the medium Currex (which is less supportive than the Superfeet). The outsole is mostly exposed EVA, and I thought I would notice a lack of traction, but it grips the road just as well as any other shoe I have (though I have only used it in dry conditions). I jumped into some pretty technical trails with them as well, and they performed very well on the uneven surface. The fit was a little off for me, I think I would have done better in a size 10 vs a 10.5. It slips a little in the heel, and feels a little too sloppy in the midfoot (all which could be fix by sizing down), but all in all a very good shoe. My one concern is the exposed EVA outsole, I am a little skeptical about it's durability compared to other shoes in it's category, but as a fresh shoe, it feels great. In my current rotation, I have the Torin 3.5, Hoka Mach 2, and the Escalante Racer. This compares well to the Mach 2, the fit and feel are very similar, I do prefer the Mach over the Kinvara for long runs, but in the shorter mid week runs I have been favoring the Kinvara. Compared to the Torin, it is not as supportive, but I like the tongue in the Kinvara better. The Kinvara has replaced my Torin in my rotation. The Kinvara is not as performance centric as the Escalante Racer, which I use for tempo workouts and races up to the half marathon (the Mach I used for my most recent marathon). All in all a great shoe. You might want to consider sizing down ( my size ranges from 10 to 10.5 in running shoes, I would have preferred a 10). I wouldn't consider it a super durable shoe, but fans of the old Kinvara will feel right at home. [Staff Review]

The Kinvara 10 is a nice update to an already great shoe in the Kinvara 9. Maintaining the shoe's spacious toe box and secure fit in the heel this latest Kinvara adds an improved footbed. The footbed in the Kinvara 10 has a new shape that contours to the shape of the foot and Saucony's EVERUN cushioning in the shoe makes for a responsive yet smooth ride. I use my Kinvara 10s for just about any run. Whether I am tackling 400s, going for my Sunday long run, or just getting in a casual 3 miles the Kinvara works great for them all. If you prefer a lightweight shoe but don't like the firmness you get from most lightweight running shoes, the Kinvara 10 is a great and versatile option.

Kinvara 10 - The Evolution of a Revolution